One of the goals of exoplanet research is finding planets with the ability to harbor life. Although humans have found many exoplanets, none of them support life like that on Earth. Of course, there is a possibility that an entirely different form of life exists within the universe. However, we may be getting ahead of ourselves when thinking about what types of life exist. For one,  we need to think about the conditions that make life possible on Earth.

According to recent scientific findings, the Earth’s ability to support life comes down to the following four characteristics:

Out of these, surface water is generally thought to be the most important condition to support the evolution of life on earth. (*1) 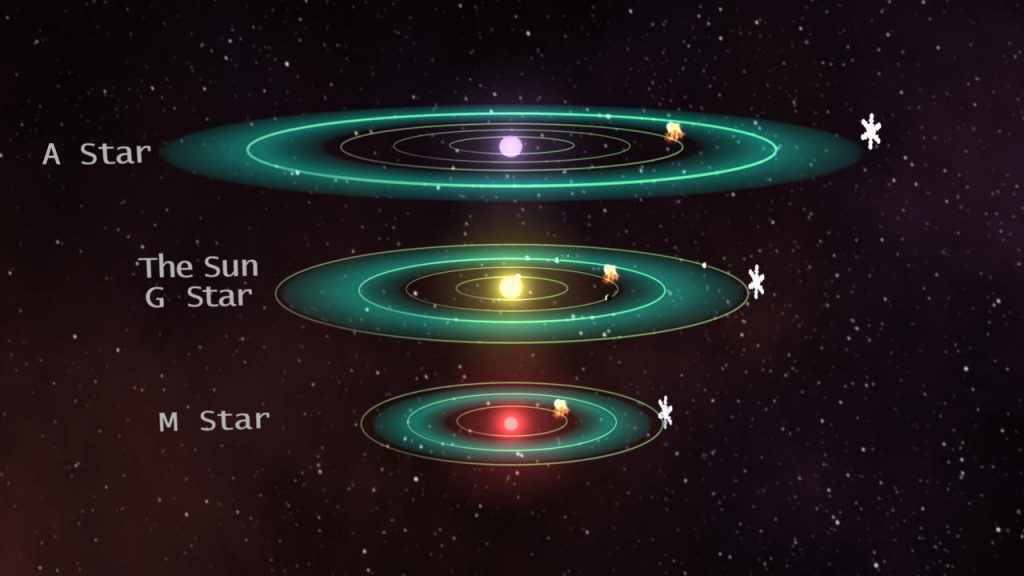 If a planet has H2O, and the orbital distance allows the planet to have surface water, scientists classify this type of planet as existing in the “habitable zone.” Naturally, planets that exist within this habitable zone are called “habitable planets.”

However, we have to be careful, “habitable planet” does not mean the planet has life, but that the planet has the necessary surface water to support life.

First of all, inside the habitable zone boundary, the “runaway greenhouse effect” occurs.

Nevertheless, on planets that contain surface water, there is a limit to the amount of energy that the planet can emit from its surface. Therefore, in cases where the energy entering the atmosphere exceeds this limit, the temperature will increase, thus, the energy balance can not be maintained. In other words, the planet is always accumulating extra energy.

This is called the “runaway greenhouse effect.”

Closer planets receive a greater amount energy from their host star than planets farther away. The location just closer to the host star than the habitable zone is where the “runaway greenhouse effect” occurs.

On the other hand, planets at the outer boundary of the habitable zone are “snowball earths.”

Even if a planet has a comparable to equivalent Earth, but it has no greenhouse gases, the temperature will be too low, and the surface water on this planet will be completely frozen.

Therefore, when the outer boundary of the habitable zone is decided, the effect of greenhouse gas is taken into consideration.

Recently, carbon dioxide has become the most important greenhouse gas on the earth.

When a planet has a similar atmosphere to that of Earth and the carbon dioxide completely freezes due to the planet’s location, the greenhouse effect is lost, and the planet is considered outside of the habitable zone. Once a planet crosses this boundary, a weak greenhouse effect means the planet’s temperature will decrease drastically and all water will completely freeze. The planet becomes a “snowball earth”.

We must be careful, however, when deciding if a planet is outside of the habitable zone. Generally planets with an Earth-like atmosphere are implicitly hypothesized to be habitable. But, if the amount of carbon dioxide differs, or if a planet has different greenhouse gas, the location of that boundary can differ as well.

In other words, the outer boundary of the habitable zone can change based on the amount and composition of the planet’s atmosphere.

*1 Unlike Jupiter’s moon, Europa, the surface is covered in ice over an ocean (interior ocean), where life is anticipated to exist.

Also, like Saturn’s moon Titan, instead of water, the surface is covered in liquid methane, which makes it controversial when it comes to the topic of the possibility of life.

However, if we are talking about about life like we have on Earth, then surface water is the most important requirement.